What Does the Law say about Marijuana in Utah

Over the past 20 years, regulations on marijuana possession have been decreasing. Today, 23 states and the District of Columbia have legalized the use of marijuana in one way or another. Although neighboring Colorado became one of those states, and Utah governor has said he is open to decriminalizing marijuana possession, this substance remains illegal in Utah. Here are some of the specific punishments and circumstances which may apply to you or a loved one who is found guilty of this violation.

Marijuana has been classified as a Schedule III controlled substance in accordance with the Utah Controlled Substances Act embedded in the Utah Criminal Code. If a person is found with an ounce or less of marijuana, they could face charges of simple possession. This Class B misdemeanor can mean fines of up to $1,000 and up to six months of prison, as stated in Utah Code § 58-37-8.

If larger amounts of this substance are found on a person, vehicle or residence, steeper penalties may be imposed. For an amount ranging from one ounce to one pound, the sentence can span between a $2,500 fine and up to one year of imprisonment, with a bump up in the charges to a Class A misdemeanor.

Any amount larger than one pound but under 100 pounds is established in the law as a third degree felony, and punishable by up to $5,000 in fines and five years in prison The charge is no longer referred to as “simple possession” and becomes “possession with intent to distribute”. After 100 pounds, the crime is upgraded to a second degree felony and the accused faces fines of up to $10,000 and 15 years of jail time.

Many conditions can aggravate simple possession or possession charges, potentially increasing the allotted sentence. For instance, if a firearm is found along with the substance, then a judge may increase the penalty by up to a year in jail time.

Possession of marijuana while within the boundaries of a correctional facility, public jail or other place of confinement also increases the severity of the crime. The same concept applies to operating a motor vehicle while under the influence of the substance and causing serious bodily injury, as established in the aforementioned act. 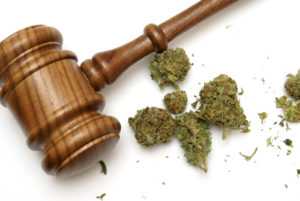 With regards to sales of a Schedule III controlled substance such as marijuana, the amount of drug being sold makes no difference when it comes to sentencing. The penalties established for all marijuana sales can include $ 10,000 in fines and up to 15 years of imprisonment.

The act also states that if the transaction is done in a school, park, library, house of worship; or if the act is done in the presence of a minor, the person shall then be convicted of a first degree felony and subject to a penalty of no less than five years in jail. In case any one of these circumstances apply, the accused is not eligible for a suspended sentence nor probation.

Depending on the context surrounding your case, marijuana use, sale or distribution in the existing legislation could mean the payment of thousands of dollars in fines or up to 15 years of jail time. In other words: if you’re accused of this crime, you need a good lawyer on your side.

With over 16 years of experience in the state of Utah, the legal team of Overson Law LLC are the kind of lawyers you want as representation if you or a loved one has been charged with this or any other serious crime. The sooner you contact an experienced drug crime lawyer, the better your chances of reducing the penalties you face. Feel free to give us a call at (801) 758-2287 to arrange a confidential assessment of your case free of charge.