How to Post Bail at the Davis County Jail in Utah

With a few rare exceptions, most defendants who are brought into custody in Utah are eligible to be released on bail.  This article will explain the rules for posting bail at the Davis County Jail, including what to do if you can’t afford the bail amount, and how to send an inmate money so that your loved one can post their own bail.  If your family has questions about any aspect of the bail process in Utah, the defense lawyers of Overson Law, PLLC are here to help.

How to Find the Inmate’s Bail Amount

The very first step in the process is to determine how much your loved one’s bail will cost.  Judges use Utah’s Uniform Bail Schedule when setting bail for each defendant, and depending on factors like the severity of the crime and the inmate’s criminal history, bail amounts can vary widely from one inmate to the next.  (For instance, bail for Class B misdemeanors ranges from $250 to $1,050, while bail for first degree felonies ranges from $1,500 to $10,000.)

To figure out an inmate’s bail amount, follow these steps:

If the amount is not affordable, your first step should be calling a criminal attorney for help getting your loved one’s bail reduced.  “Excessive bail” is prohibited by the Eighth Amendment, but unfortunately, that doesn’t always stop judges from setting bail which is initially too high.

You may also want to think about using a bail bond, though there are some potential downsides which should be weighed carefully.  If the bail amount can be reduced, getting a bail bond may turn out to be unnecessary.

If you can afford the amount as-is and don’t need to get a reduction or use a bail bond service, you can start the process of posting bail right away.  Here’s how it works. 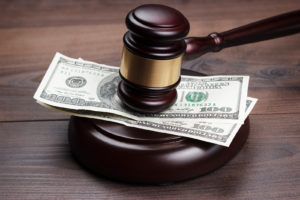 It doesn’t matter if you’re reading this at 2:00 P.M. or 2:00 A.M. – inmates can be bailed out whenever is most convenient for you, 24 hours a day.  However, you should be prepared to set aside some time, no matter when you plan to pay, since the process usually takes at least a few hours.

You have a few options to choose from when it comes to posting bail.  The following payment methods are acceptable:

Payments are made directly to the court from which the charges originated.  You can find this information in the Inmate Roster by going through the steps described above.  (The court will be listed next to the name of the charge.)

Some courts, but not all, will accept credit card payments.  If you’re planning on paying by credit card, you should call the court in advance to confirm.  You can find the phone number and address for the court you need to contact by using this Utah state court directory.

Instead of posting bail directly, you can also add money to the inmate’s account, so that he or she will have the necessary funds to bail themselves out.  Again, there are a few different options for using this method.  You can:

Following these steps will bring you to a new screen listing inmate names.  Click the grey “Select” button next to the correct name, and follow the prompts to make your deposit.

To deposit funds through a jail kiosk, you’ll need to visit the jail in person.  The Davis County Jail is located at the following address:

This map of the jail will help you find your way around the facility.  The visitors’ entrance is located at:

Lobby kiosks are open 24 hours a day, seven days a week.  Transactions take about 15 minutes to post to the inmate’s account.

If you have any questions about posting bail, using a kiosk, or other aspects of the jail, call one of the following phone numbers:

If one of your loved ones has been charged with a crime in Utah, your family needs dedicated legal support.  To set up a free and confidential consultation, call the law offices of Overson Law, PLLC at (801) 758-2287 today.