Utah is known for dusky red canyons, a relaxed pace of living, and strict liquor laws.  With its quiet valleys and polite small-town atmosphere, the “Beehive State” seems like one of the last places in the country you would expect to struggle with sexual violence — but you might be surprised. Beneath Utah’s wholesome veneer, the statistics paint a bleaker portrait. 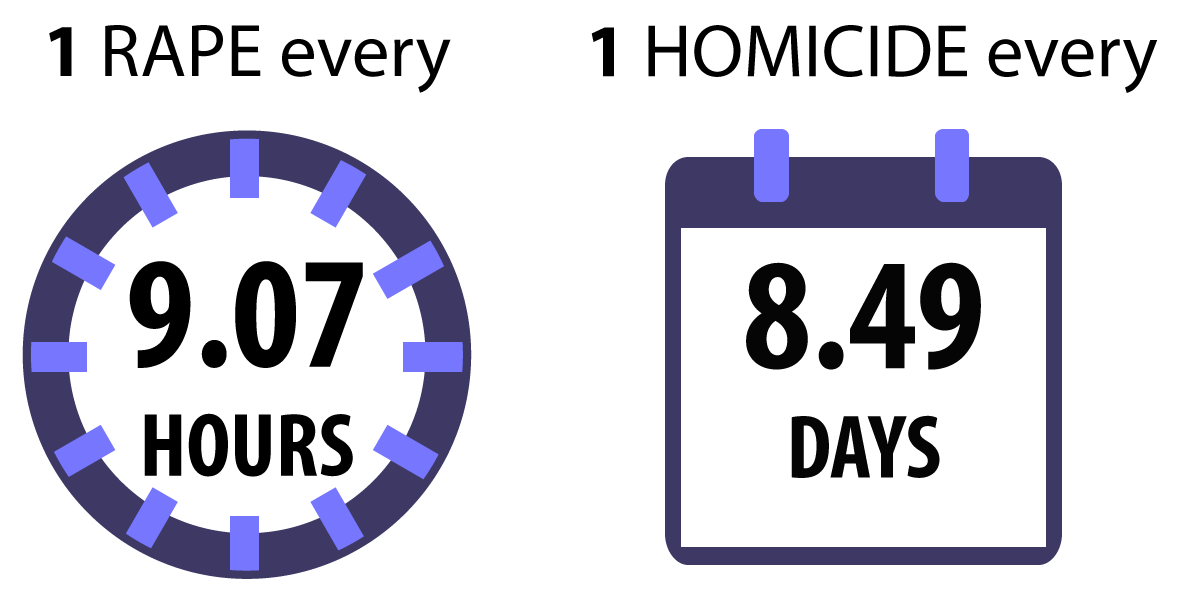 Each year, the Utah Department of Public Safety and the Bureau of Criminal Identification release a comprehensive crime analysis called the Crime in Utah Report.  The most recent edition of the Report, released to the public in 2012, contains the following statement:

In other words, the incidence rate of rape in Utah is increasing more sharply and more rapidly than any other category of violent crime — even as the murder rate plummets.

The Report’s “Crime Clock” feature presents those numbers in a less abstract way: one homicide every 8.49 days, compared to one rape every 9.07 hours.  That means for each murder in Utah, there are more than 22 occurrences of rape.  On average, 2.65 rapes will be reported in a single day.

The arrest statistics related to forcible rape do show a decrease from 151 cases in 2011… but only to 149 cases in 2012.  Perhaps not such a marked improvement after all — particularly considering that arrests for other sex crimes, discounting forcible rape and prostitution, increased by a full 7.19%.

Where Utah’s youth are involved, the report’s numbers are even higher.  While adult arrests declined by 1.34%, juvenile arrests for forcible rape actually climbed by 5.21%.  Meanwhile, virtually every other category of juvenile crime arrests saw a decrease from 2011 to 2012, including robbery, burglary, simple and aggravated assault, theft, fraud, vandalism, DUI, and disorderly conduct.  Yet in the midst of all these improvements, for some reason, forcible rape among juveniles still increased — even as the overall juvenile arrest rate declined by 6.03%.

Without effective intervention, what will happen as the younger generation ages?  It’s a troubling question — particularly when you consider additional arrest data supplied by the Bureau of Justice Statistics.

When analyzing offenders of both genders and all races and ethnicities incarcerated for either rape or other sexual assault, the BJS reports that:

Utah doesn’t currently compare well to other states, either.  According to a CNN report from February of 2014, Utah ranks #17 for the highest number of forcible rapes per 1,000 residents, with an average of 33 per 1,000.  (For comparison’s sake, New Jersey scored lowest with 11 per 1,000, while sparsely-populated Alaska reported nearly 80 per 1,000.)  According to the BJS’ 2011 Criminal Victimization report, the national average for rape and sexual assault combined was 22.5 per 1,000 — far lower than the statewide average for Utah.  State legislators have attempted to tackle the issue by enforcing some of the harshest penalties in the nation, with mandatory sentences of 15 or even 25 years to life for most sex crimes.

The trends themselves are clear — but what’s driving them?  Of all places, why Utah? 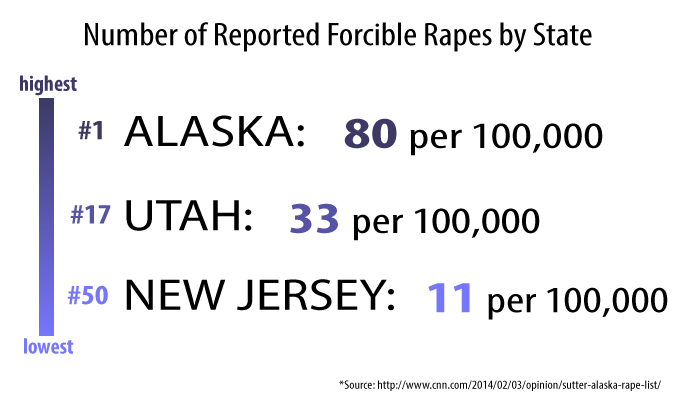 The History of Sexual Assault in Utah — Is There a Link to the LDS Church?

There may or may not be any concrete answers.  It’s unquestionably a complex issue, and opinions and experiences will always vary.

Nonetheless — something is causing or at least contributing to this issue.  And some people think that “something” is the last culprit you’d probably expect.

Mormonism, of course, does not condone and certainly does not encourage rape or sexual assault. On the contrary, the LDS Church clearly states, “Victims of abuse should be assured that they are not to blame for the harmful behavior of others.  They do not need to feel guilt.  If they have been a victim of rape or other sexual abuse, whether they have been abused by an acquaintance, a stranger, or even a family member, victims of sexual abuse are not guilty of sexual sin.”  The Church also urges, “Victims of abuse should seek help immediately, normally from their bishop or branch president.  His first responsibility is to help those who have been abused and to protect those who may be vulnerable to future abuse.”

Nothing about the LDS Church’s official position appears to level criticism or place blame, or to promote violence in any manner.

That being said, some former members of the Church use personal experience to point toward what they believe to be a strong link.  A visit to the exmormon.org forum for — you guessed it, former Mormons — reveals some harsh opinions.

“I would think Utah would be a haven for sexual predators,” one member says.  “The first person called is usually the bishop, not police,” the poster elaborates, adding, “Women are taught from birth to be meek and lowly and everything is her fault.”

Another site visitor writes, “I, and many of my closest friends were victims.  I often wondered, as I grew up in Provo, how many other people suffered the same fate.  I knew it had to be high, judging from my own personal experience and that of other girls in my own ward.”  The same visitor adds, “Sexual deviancy is yet more fallout from the madness of Joseph Smith.”

Yet another poster cites a 1992 article written by Elder Richard G. Scott of the Quorum of the Twelve Apostles, in which Scott states, “Most often, the victim is innocent because of being disabled by fear or the power or authority of the offender.  At some point in time, however, the Lord may prompt a victim to recognize a degree of responsibility for abuse.”

The poster quotes this passage, adding, “I’m still trying to figure out what I could have done, as an eight-year-old little girl, to stop a seventeen-year-old priesthood holder from molesting me.  I didn’t know what sex was, I could hardly have encouraged it.”  The post ends, “There’s only one bitter fruit here; it fell like all the rest of them from Joseph’s tree.”

Personal anecdotes are certainly interesting to read; but is there anything to substantiate them?

At least one member of Utah’s law enforcement has his own thoughts on the matter — and he doesn’t mince words.

“The sexual predator is alive and well in this community as well as over the world,” says Arnie Lemmon, officer and lead rape investigator for LDS-affiliated Brigham Young University, or BYU.  “I don’t want you to feel like this is Rapeville, USA, because it’s not…  We try to do everything we can to combat it, but it happens.”

In particular, he recalls one victim whose response left a lasting impression.

“She said something that blew me away,” recalls Lemmon. “She said, ‘I should have died before I let him do that to me.'”

Lemmon told the Deseret News in 2003, “We’re sending women the wrong message.  We’re saying ‘You should be dead. You’re a sinful woman because you survived.'”

“I’m a perversion to the good saints of my church,” he read from one anonymous victim’s letter.

The headline of the article is just as disturbing: “90% of Provo Rapes Not Reported to Police.” 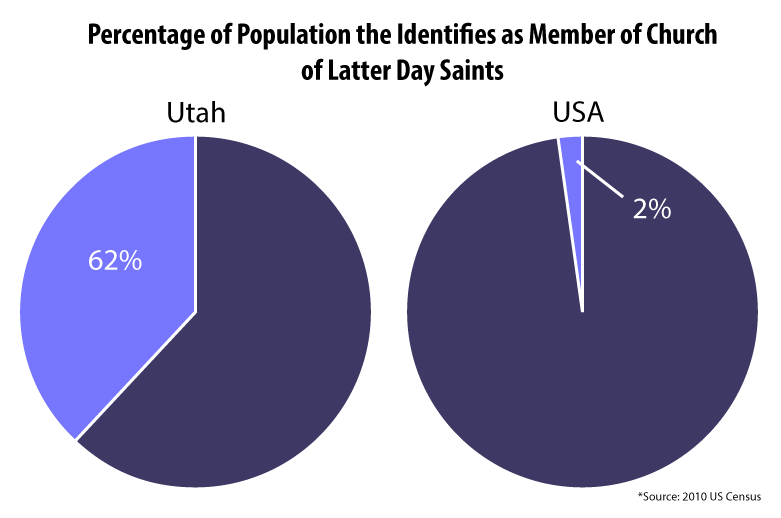 In all fairness, that particular article was printed over a decade ago — but as recently as April of 2014, the Salt Lake City Police Department came under fire after a City Council meeting unveiled that the SLCPD shelved or destroyed 79% of all rape kits logged from 2003 to 2011, or approximately 788 out of 1,000 kits.  Only about 20% of the kits were ever opened and examined.

“The commitment here is not to respond to and prove anyone wrong,” says SLCPD Chief Chris Burbank, “[but] to evaluate the process by which we provide services to the victims in Salt Lake City of rape and to make sure that everywhere along the process that we are doing the right thing.  And we hope that it identifies areas that we can improve and do a better job.”

Rising crime rates, a culture of blame, and disregard for evidence are obviously concerning issues which must be rectified as swiftly as possible.  Not only do these problem areas hurt the victims of sexual crimes — they also hurt the innocent “offenders.”  What about the defendants who are wrongfully convicted and unfairly punished for crimes that were never committed?

In 1990, a 32-year-old man named Kevin Peterson was struggling with a difficult custody battle over his son, age eight, and daughter, age five.  At first, Peterson seemed to prevail: he was granted custody of his two children, and for a time, life went on as normal.  But one day that came to an abrupt end.

“He’s an upright, good person,” says defense attorney Jason Richards.  “He just got an extremely bad break.  Everything just lined up against him.”

Out of nowhere, Peterson found himself living through a nightmare: under arrest, sitting in court, listening to his son testify about being sexually abused.

“‘I don’t got a chance in hell,'” Richards recalls his client saying.  “So that’s why he [pleaded guilty].”

Specifically, Richards pleaded guilty to sexual abuse of a child — a second degree felony.  He was initially sentenced to 36 months of probation, on the condition he would make a detailed confession as part of a treatment program.  But because Richards did not commit any abuse, no such confession was made.

“I did not sexually abuse [my son],” Peterson wrote.  “However, after being fully advised as to the consequences of my decision by my attorney, I want to plead guilty to the second-degree felony.”

Displeased with his resistance, treatment counselors petitioned to revoke Peterson’s probation — and succeeded.

He spent the next 15 years in prison.  At points in 1993 and 1995, he even made false confessions in a desperate (and unsuccessful) attempt to change the parole board’s mind.  He was only released when his victims came forward and recanted their confessions in 2007.

Peterson’s criminal record was expunged, and he is no longer registered as a sex offender — but more than a decade of his life was spent in a cell.

“It’s just a tragic case,” says defense attorney Jason Richards.  “[It] just took forever for him to be vindicated.”

And Peterson is not alone.  Since 2008, at least 14 factual innocence petitions have been filed in Utah, including Jed Gressman, who spent three years in prison for aggravated sexual assault until being exonerated by DNA evidence.  Bruce Dallas Goodman spent 19 years in prison after being wrongfully convicted of the murder and rape of his girlfriend, until attorneys from the Rocky Mountain Innocence Center in Salt Lake City petitioned for the rape kit to actually be tested.  Like Gressman, Goodman was exonerated based on DNA evidence, and was released from prison in 2004.

In 2011, University of Virginia law professor Brandon L. Garrett published a book titled Convicting the Innocent: Where Criminal Prosecutions Go Wrong, looking at 250 DNA exoneration cases across the United States.  Garrett found that a shocking 89% of the cases involved sex offenses, with 68% pertaining to rape and 21% pertaining to rape plus murder.  As reported by the Urban Institute Justice Policy Center in a 2012 analysis titled “Post-Conviction DNA Testing and Wrongful Conviction,” a study conducted by Garrett in 2008 also found that “6% of rape exonerees had a false confession,” while “41% of rape-homicide exonerees had a false confession.”

If you have been charged with a sex crime in Salt Lake City or elsewhere in Utah, it is absolutely critical that you contact an experienced Salt Lake City criminal defense lawyer immediately.  For a free and confidential legal consultation, call Darwin Overson right away at (801) 758-2287.